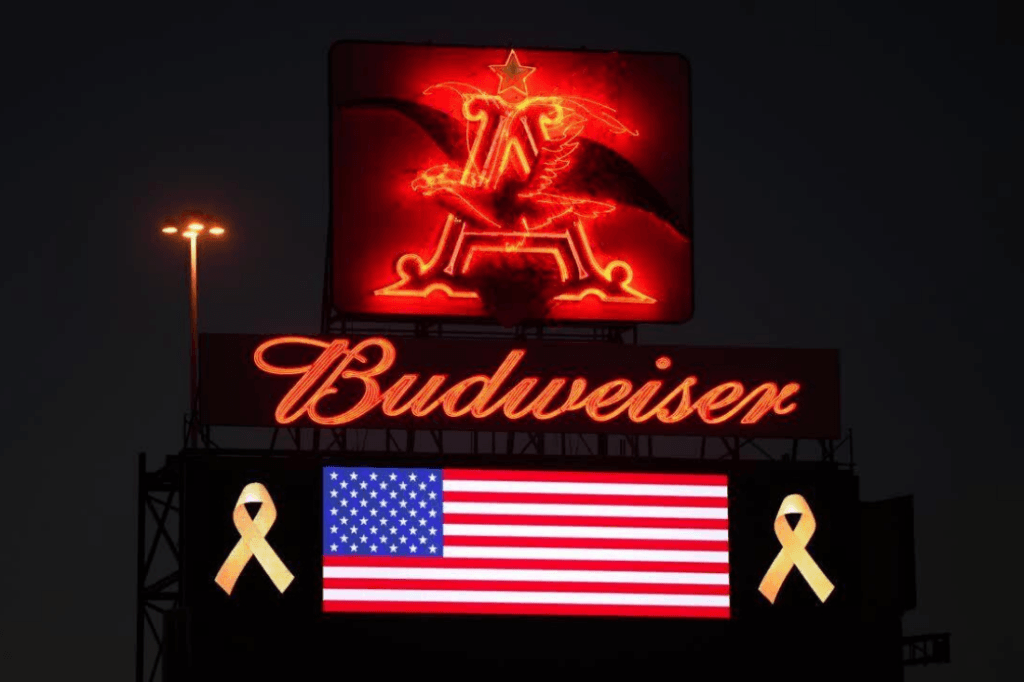 Anheuser-Busch relit their iconic “A & Eagle” spectacular display on Thursday evening, November 10th, after nearly a year of renovations. The Flying Eagle’s incandescent bulbs have been replaced with LED lamps and a new 14’ x 61’ digital LED billboard that replaced the existing fluorescent-lit, flex-faced sign cabinets.

A significant undertaking, the renovation brought together the expertise and efforts of local builders and craftsmen, dedicated Anheuser-Busch teams, government liaisons, real estate experts, and more to ensure the sign will continue to shine brightly for years to come.

The history of the A & Eagle sign is as fascinating as the sign itself. It was designed in the early 1950s by Byron Rabbit, a Disney animator. To create a realistic wing pattern, Rabbit rented an eagle and released it into a large armory to study its flight and determine the shape and position of the wings at different points. Besides the full stationary neon eagle, there are five additional neon outlines of the eagle in various positions of flight. When the animation is running, the eagle appears to be flying.

The original sign was built in 1953 by ArtKraft Strauss in New York and installed on a building on Wilshire Boulevard in Los Angeles. It cost approximately $350,000 to make. When the construction of the new building blocked the view of the sign, Anheuser-Busch had it removed, shipped to St. Louis, and installed at its present location along Highway 40 and Grand Avenue. It’s undergone several major restorations over the years.

The sign company, American Jewelite, owned the building on which the sign was installed in St. Louis. In the mid-1960s, Federal Heath Sign Company purchased American Jewelite and the building. Federal then became the “keeper” of the sign, providing regular repairs and maintenance and, most recently, helping with the restoration.

In the early 1980s, the city decided to expand Highway 40. Because there was no space to widen it, they built a second level. This level obstructed the view of the sign, so Anheuser Busch had Federal Heath raise the sign approximately twenty feet. This new height was almost eye-level with the westbound traffic, and because the building is right next to the highway and at a curve in the road, it presents the illusion of driving into the sign.

As for the sign, it has more than 4,000 feet of neon tubing. The “A” portion of the logo is filled with over 1,000 led lamps that turn on from the bottom up – as beer is poured into a glass filling up. The “A & Eagle” logo measures 25 feet tall by 33 feet wide, and the word “Budweiser” stands 8 feet tall and stretches 58 feet wide. Beneath it all is a 14’ x 61’ digital LED billboard that can display various messages.

A St. Louis staple since 1962, the sign has become a symbol of Budweiser’s iconic image in St. Louis. The people of St. Louis say they can’t imagine their city without it. Anheuser-Busch is proud to restore the beloved landmark and continue to honor the company’s long hometown history.