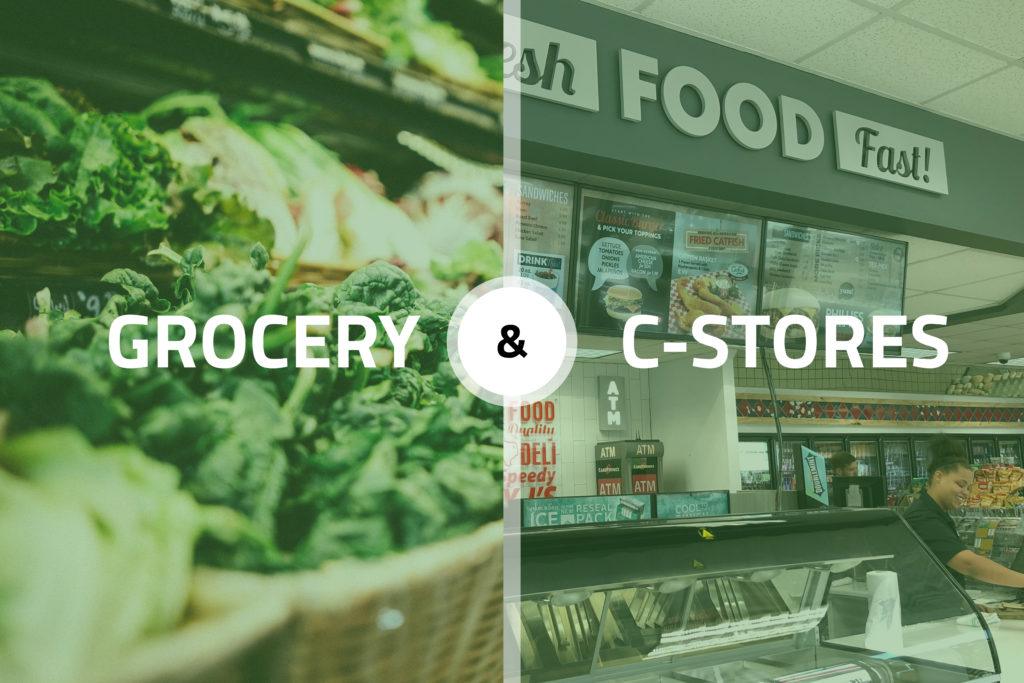 Once upon a time, McDonald’s served food and Starbucks served coffee. Then something unexpected happened. Starbucks introduced food and McDonald’s ramped up their coffee program. Each saw new opportunities and crossed over to cash in.

In the same way, supermarkets and convenience stores (c-stores) have borrowed from each other’s successes. As each business niche studied consumer behavior, they found themselves stepping onto each other’s turf. The result is a world where the line between traditional grocers and c-stores grows increasingly blurred in terms of size, location, products, and décor.

The past was simple. People stocked their pantries at supermarkets and visited c-stores in between. No matter how they changed through the years, it remained clear which was which.

C-stores were instant. They headlined convenience for staple and impulse items, even converging with traditional gasoline stations to maximize sales when fuel tanks ran low. Introduction of remote-access gas in the 1960s and pay-at-the-pump in the 1970s raised the profile of c-stores who took advantage of the trend, with four out of five c-stores offering pay-at-the-pump by the early 2000s. They made tobacco, single-serve drinks, and snacks available with up-close parking and fast checkout. They pioneered the always-open concept in the mid-1960s.

Supermarkets were all-inclusive. They bridged the gap between farmers/processors and consumers in a more comprehensive way. While early grocers were small and reflected the limited distribution networks of their times, supermarkets emerged in tune with demand and enhanced distribution networks. Supermarkets accounted for 35 percent of all food sales in 1950, then dominated with a 70 percent share by 1960. The concept took a further leap with the development of high-volume, low-cost superstores and warehouse clubs that offered groceries and more.

It turns out that consumers prefer both fast and all-inclusive. To capture as much business as possible, c-store and supermarket companies continue to test concepts that make them harder to differentiate from each other.

For c-stores, the game is to become even more convenient. For example, the introduction of digital signage expedites sales and directs customers in a stimulating way. For supermarkets, the effort has turned to making a big selection more accessible. Inside, self-checkout by scanner or app helps bypass the lines. Outside, delivery services have gained a strong foothold in the marketplace. Picking up pre-placed orders in the parking lot is on a similar track, with stores like Kroger, Cub, Target, and Sam’s Club investing heavily in signage and infrastructure.

One size doesn’t fit all for c-stores anymore. In fact, a NACS research report lists six different categories, based on square footage: kiosk, mini c-store, limited selection c-store, traditional c-store, expanded c-store (a “superette” approach that includes fast foods), and hyper c-store (offering products and services arranged in supermarket-like departments). At the same time, supermarkets have launched down-sized concepts aligned with a 2017 Nielson Company report that states, “While there is some growth for large stores, the real winners are mini markets, small supermarkets, and convenience stores.” Among other things, smaller footprints make it possible for traditional grocers to get closer to urban shoppers.

C-stores took the early lead in late-night hours, with the first 24-hour c-store reportedly opening in 1963. Grocers soon waded in, with 4 percent of supermarkets open 24/7 by 1972. Along with c-stores, open-all-hours is now mainstream nationwide at stores like Walmart, Target, and some traditional supermarkets.

C-stores and gas stations serve similar needs, so their marriage seemed inevitable. Gas stations with cold drink machines expanded their impulse-sales areas, while c-stores realized that fuel stops meant more customers dropping by. Supermarkets and discount stores introduced fuel in the late 1990s, capturing nearly 6 percent of the market by 2002. The big benefit for supermarkets was the ability to cross-market with fuel discounts and frequent-filler programs. Digital signage on pumps provided another way to reach customers, which c-stores quickly adopted as well. As a further sign of change, c-stores are now willing to do away with fuel pumps when necessary. Sun Stop recently opened a college-town location without its Inland forecourt.

For a number of years, c-stores have shared store space with national fast-food brands. At the same time, supermarkets have devoted a department to deli or other foods prepared to order. These days, Zippy J’s and Sun Stop are among c-stores that feature fresh, made-to-order food in the store. Some c-stores even offer table seating. Meanwhile, both large and smaller supermarkets are ramping up their selection of grab-and-go items to appeal to customers in a hurry.

Whether you step into a Piggly Wiggly supermarket or an Enmarket c-store, their attention to layout, signage and décor is increasingly savvy. Both types of company realize that customers expect to find an inviting place to shop for something fresh. They recognize customers’ love affair with screens, so digital signage often plays a key role. Bland walls, floors, and ceilings have become a canvas where stores shape the customer experience, utilizing printed graphics in creative ways to suggest textures and form dimensional shapes that bring areas to life. Even windows play host to projected signage based on newer technologies. Both grocers and c-stores have access to the same tools, and they are making full use of them.

Grocers and c-stores are in a race to stake out territory in a marketplace where customers are still sorting out their own preferences. In a way, it’s a new world. In a way, it’s how the world has always been.

As dining habits change and electric cars make inroads, the product mix of both c-stores and supermarkets is likely to evolve. Marketers will continue to seek out consumers’ needs, and signage will continue to be an important part of making the shopping experience convenient and enjoyable.